Vanilla Kush wax strain has THC levels that can reach upwards of 18%, making for a relaxed body high that can be too powerful for some new users. Experienced tokers, however, can usually summon enough energy to be active despite the high.

Euphoria and happiness are also common with Vanilla Kush. Our Vanilla Kush wax  is good for mental conditions and arthritis pain. Not surprisingly, it tastes and smells of vanilla, with sweet lavender notes.

The Vanilla kush bud has a light green appearance that is also reminiscent of vanilla. Dry mouth is likely, though other adverse affects are mild. This Vanilla Kush wax is mostly indica (30:70 sativa/indica ratio), and it descends from a Kashmiri Hash Plant and an Afghani Kush.

It’s most popular in Colorado and Oregon, though it can be found elsewhere. Vanilla Kush wax is easy to cultivate, making it an ideal choice for patients who grow at home, and it produces a high yield. Due to the powerful high of Vanilla Kush wax, newcomers and occasional smokers might do well to avoid this strain. But it’s perfect for anyone in search of a nice, soothing body high.

This indica strain comes from Barney’s Farm in Amsterdam and clinched 2nd place overall at the 2009 High Times Cannabis Cup for the coffee shop and seed company. Bred from Afghan and Kashmir strains, this Kush beauty is a gift to the senses with her notes of vanilla, lavender, and a hint of citrus. Plants flower in 8 weeks and produce large, soft flowers that are light green with hints of orange.

Is shatter good for dabs? 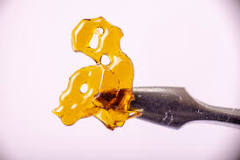 Like dab wax, shatter can be vaporized with a dab rig. A small pinch of shatter is applied to the dab nail, which is subsequently ignited to heat the concentrate and produce a potent vapor that delivers powerful, instant effects.

There are no reviews yet.

Be the first to review “Vanilla Kush Wax” Cancel reply